Mesh gradients are supposed to allow for smooth shading/colouring of vector graphics. The usual Coons (and tensor) patches are smooth on their interior, but across boundaries we may still have sudden changes (in derivative), leading to visual artefacts. Here I show how using tensor patches, while using the same interpolation for both positions and colours, allows us to overcome these problems. The key here is to use cubic rather than linear interpolation for colours (which Illustrator at least indeed seems to use), and to make effective use of the interior control points of tensor patches (Coons patches themselves cannot be easily modified to achieve the same effect, but we can develop a Coons-patch-like system that does support smooth boundaries). Note that just using tensor control points is not enough. 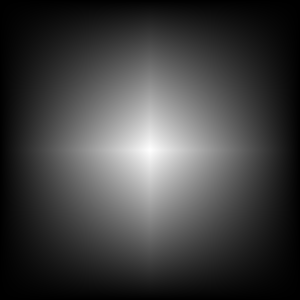 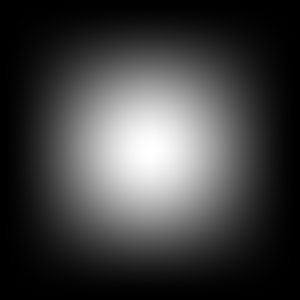 The above is a demonstration of how tensor patches using cubic interpolation for both positions and colours can help in creating smooth transitions between patches (where smooth is taken to mean that the derivative is continuous). Both gradients consist of four patches (one for each quadrant), but the left gradient uses linear interpolation for the colours, while the right one uses cubic (Bézier) interpolation such that the derivatives are matched on both sides of the boundary between the two patches (essentially by mirroring the values across the boundary, just like with the `S‘ path command). In both cases the position handles are mirrored across the boundary (again like with the `S‘ path command). Note that in this example this mostly means the derivatives are zero across the boundaries, but this is not true everywhere: the green channel essentially increases linearly from left to right at the top of both images (which is of course also smooth across the boundary). The handles for the above gradients are displayed below (just for the top halves): 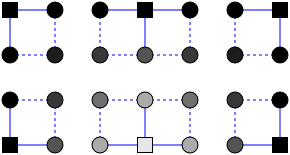 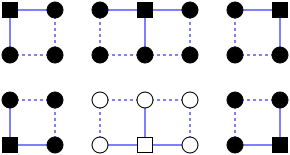 Note that this effect cannot (in general) be created using Coons patches. In part, this is because if we represent a Coons patch using a tensor patch, the interior handles depend on (almost) all of the handles specified by the Coons patch, this makes it impossible to independently make the derivatives match the derivatives of neighbouring patches on all sides of a Coons patch.

It is possible to develop an alternative to Coons patches, that does allow matching derivatives across boundaries. In particular, if the interior control point p(2,2) is set equal to p(2,3)+p(3,2)-p(3,3) (and other interior control points follow analogously), then whenever a gradient is smooth at its crossings, it is smooth everywhere (drawing the situation immediately makes clear that the relevant symmetry properties of the handles on the boundary are inherited by the interior handles). This type of patch would have the same kind of number of control points as a Coons patch (except that we’re now treating colour on equal footing with position). However, in contrast to Coons patches it would allow matching derivatives across boundaries.

For the mathematically inclined, what is actually going on is that we try to make sure that the gradients of two patches match on the shared boundary. For Bézier patches, this gradient is completely determined by the 12 control points that determine the boundary itself (shared by both patches) and their direct neighbours. These control points can be considered to form three pairs of curves: the boundary positions bp(v) and colours bc(v), the “left” positions and colours (lp(v),lc(v)) and the “right” positions and colours (rp(v),rc(v)). Now suppose that (x,y) is a point on the boundary, so that there is some v such that bp(v)=(x,y). Now, what is the gradient at (x,y) for both of these patches?

Given the gradients of both patches at their shared boundary, it is clear that the most straightforward way to make them match is to make sure that rc(v)=2bc(v)-lc(v) and rp(v)=2bp(v)-lp(v). The method discussed above does this, but allowing this mirroring to be specified per corner, rather than per side (slightly more flexible).